Dr. Mark Finley and Dr. Michael Hasel take you on a journey from the Isle of Patmos to the seven church of Asia Minor: Ephesus, Smyrna, Pergamos, Thyatira, Sardis, Philadelphia, and Laodicea. Discover how archaeological discoveries reinforce the great themes written by John in the book of Revelation.

Revelation is especially designed by God to reveal His plans and to unmask the plans of Satan. Its prophetic images tell the story of the triumph of Christ over all the forces of evil. Despotic powers rise and fall, but Jesus is eternal. His plans succeed. In spite of opposition and persecution, Jesus and His people are victorious. Archaeology does not prove the Bible is inspired, but it does present evidence for seeking minds that confirms its authenticity. A Journey to Revelation’s Seven Churches is the fifth and final course in The Discoveries of a Lifetime series taught by Dr. Mark Finley and Dr. Michael G. Hasel. 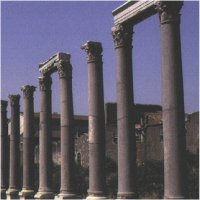 The pagan Roman emperor, Domitian, exiled John to the Isle of Patmos to silence his powerful Christian witness. In this lesson, you will survey the great themes of the Bible’s final book—The Revelation of Jesus Christ.